SimCity Societies is the 5th title in the SimCity series, released in 2007. Controversially, Maxis and Will Wright were not involved in the production of the game.

Difference and Comparison to SimCity 4Edit

SimCity Societies greatly differs from its predecessor, SimCity 4. As with previous titles in the 'Sim' series, the overarching 'goal' of play is to construct a prosperous city. However, SimCity 4 (and previous SimCity games) were focused primarily on building the city, rather than tending to the welfare of the inhabitants.

SimCity Society takes the scale of the game down a level; while players still tend individual cities, greater focus is given to the inhabitants, and building a society within the city. Small commercial shops can be individually placed, a feature that was previously unavailable in mainstream 'Sim' titles (though SimTown, geared towards younger players, allowed the placement of individual buildings).

While previous mainstream SimCity titles could be best described as mayorship, or "god" simulators, SimCity Societies is different, as foreshadowed by the previews and statements from the developers, by being a "social engineering simulator" rather than a city-building simulator.

Public works and a tax system do not play a part in the basic game. Instead, players get daily income from workplaces in the city. However, a downloadable update includes gameplay modes where a daily tax is incurred based on the buildings within a city. Transportation networks have been simplified to dirt roads, paved roads, subways and bus stops. Players do not build zones, a key element of past SimCity games; instead, they have the ability to directly place individual residential buildings and work places, something not seen in previous editions, and similar to Monte Cristo's game City Life. There are also six "social energies", called societal values, which allow players to learn about the characteristics of the citizens. The six societal values are productivity, prosperity, creativity, spirituality, authority, and knowledge. The city will look, and act, in accordance with the energies the players choose. Players may focus on satisfying one, several, or all of these values. An improved version of the reward system introduced in SimCity 2000 has been included in the game. 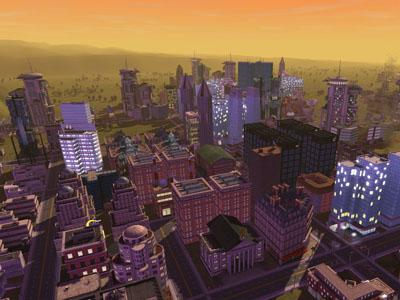 The game is "fully customizable" and allows the players to customize individual buildings, decorations, citizens, and game rules. Prior to its release, when mentioning the depth of such customization, a Tilted Mill representative stated that players proficient in C# and XML will have easy access to every asset of the game, and that basic tools would be provided for building editing.

The only known expansion pack (titled SimCity Societies: Destinations) adds tourism locations, such as hotels and beach resorts. It has been announced that there are over 100 new building types available in Destinations.

In Simcity Societies, there are around 20 'themes' for the city, and the player's goal is to create and maintain a society within a single 'theme'.

Retrieved from "https://maxis.fandom.com/wiki/SimCity_Societies?oldid=5100"
Community content is available under CC-BY-SA unless otherwise noted.